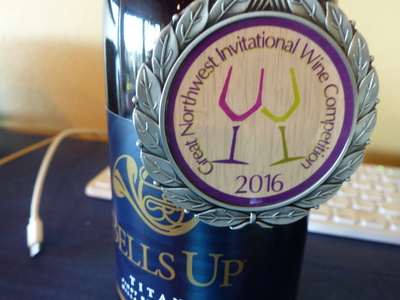 The 2014 Titan Pinot Noir from Bells Up Winery, which received a silver medal at the 2016 Great Northwest Invitational Wine Competition, is photographed during an oral history interview with Dave and Sara Specter at Bells Up Winery in Newberg, Oregon on June 19, 2017. The Specters were interviewed by Linfield College Archives staff Stephanie Hofmann.

Dave Specter, an award-winning winemaker, started Bells Up Winery in 2013 with the help of his wife, Sara. The first Bells Up vintages were released in 2015. Bells Up specializes in Oregon Pinot Noir, with grapes sourced from micro-growers in the northern Willamette Valley.