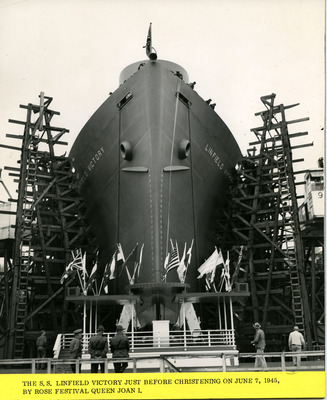 The caption on the image reads, "The S.S. Linfield Victory just before christening on June 7, 1945, by Rose Festival Queen Joan I." The S.S. Linfield Victory was built at the Oregon Shipbuilding Corporation in Portland, Oregon. It was in service for 5 years before taking a brief break in Astoria, followed by 2 years of service during the Korean War. The S.S. Linfield Victory was also used in Vietnam, with its first voyage there commencing on August 13, 1965; it traveled from Hoboken, New Jersey through the Panama Canal to San Francisco, California and then on to Saigon. The ship was scrapped in Santander, Spain in 1986.

Additional Files
LCA076.tif (76190 kB)
This file is an archival copy for this image. It is significantly larger in size and will take longer to download than the access copy that is available via the Download Original icon.