Home > Libraries > Archives > In Their Own Words > Interview Photos > 11 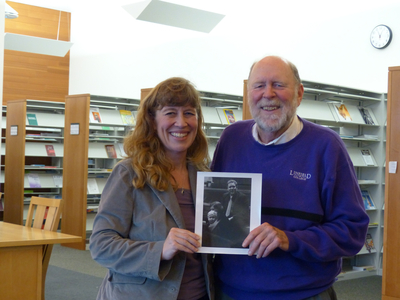 Debbie Harmon Ferry and Dave Hansen pose together with a family photograph after their oral history interview with staff from the Linfield College Archives.

Hansen began his time at Linfield as an Economics professor, later became Dean of Students, and is now a professor emeritus. Ferry has been at Linfield's McMinnville campus since the age of one and grew up on campus. After spending some time away, Ferry returned to Linfield knowing it was the right place for her for school and, later, for her career. Ferry began as an admissions counselor and is currently the Director of Alumni Relations.