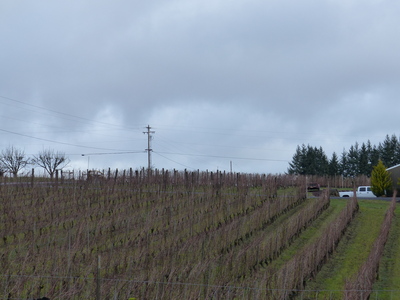 Rows of grapevines cover a slope in the vineyard under gray skies at Brooks Winery in Amity, Oregon. This image was taken during an oral history interview with Janie Brooks Heuck on January 10, 2018. Brooks Heuck was interviewed by Linfield College archivist Rich Schmidt. Also in attendance was Linfield College student Tia Elder.