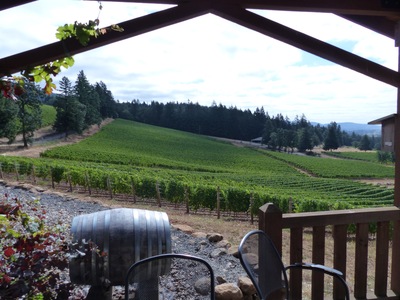 A sloping vineyard and evergreen trees at Vidon Vineyard in Newberg, Oregon can be seen from a covered patio on site. This image was taken during an oral history interview with Don Hagge on August 3, 2016. Hagge was interviewed by Linfield College Archives staff Rich Schmidt; also in attendance were Linfield College archivist Rachael Cristine Woody and student Shelby Cook.