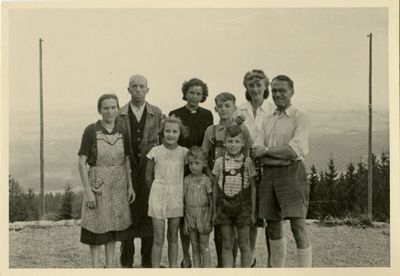 The members of three German families who shared the same house with the 3190th Signal Service Corps (S.S.C.) pose for a photo. This image was taken in Hohenpeißenberg, Germany, outside the house they shared. Bob Jones was one of the soldiers in the 3190th S.S.C.; he later became a professor of physics at Linfield College from 1955-1987.

Additional Files
Jones008.tif (10754 kB)
This file is an archival copy for this image. It is significantly larger in size and will take longer to download than the access copy that is available via the Download Original icon.