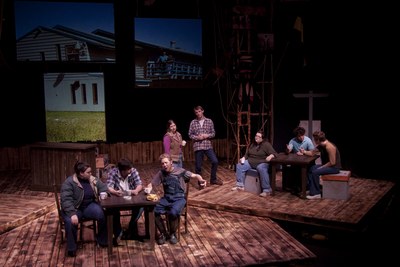 This image is a photograph of Linfield College Theatre’s November 2012 production of Kickin’ Sand and Tellin’ Lies by Jackson B. Miller and Christopher Forrer. A single unit set was utilized to depict the numerous locales in which the play took place. Changes in areas used by the actors, furniture pieces, props, lighting, and images and videos projected on the three vertical screens were employed to suggest the locales. The play was directed by Janet Gupton with scenic and lighting designs by Tyrone Marshall, costume design by Rebecca Meridith, sound design by Laura Haspel, and technical direction by Robert Vaughn. Jennifer Layton was the stage manager.

A week later at the Sunset West, Gusty and other dorymen and their families wait to hear from Les and some of his buddies who have returned to Sacramento to continue the fight against fishing regulations they believe will be harmful to the fleet. Also, the fishers are concerned about the price they are receiving for their catch (Act II, scene 7). The characters (actors) include, from left to right, MARILYN HANFORD (Madison Sanchez), SAM “THE KID” McBRIDE (Nicholas Granato), BEN “GUSTY” GUSTAVESON (Colton Wright), CELIA WARNER (Amanda Wolf), CLINT “SALTY” FOLEY (Logan Mays), BARBARA JENKINS (Sammi Palmer), GARY (Lukasz Augustine), and BUZZ (Cody Meadows).

Additional Files
lsdp_tm_ph_2012_kstl_pph_7058_1119.tif (16231 kB)
This file is an archival copy for this image. It is significantly larger in size and will take longer to download than the access copy that is available via the Download Original icon.