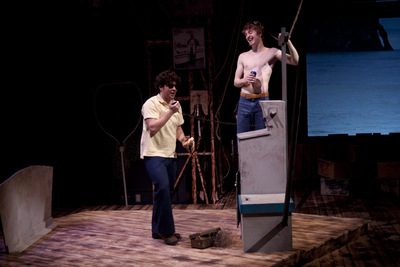 Greenhorns Gary and Buzz are “fishing” in Les’s dory and trying to explain to The Kid over the CB why they haven’t caught any fish after several hours on the ocean. They have, of course, downed a few beers (Act II, scene 3). The characters (actors) include, from left to right, GARY (Lukasz Augustine) and BUZZ (Cody Meadows).

Additional Files
lsdp_tm_ph_2012_kstl_pph_7156_1098.tif (16233 kB)
This file is an archival copy for this image. It is significantly larger in size and will take longer to download than the access copy that is available via the Download Original icon.