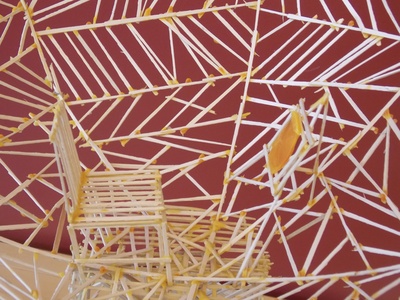 This sculpture was created as part of the Linfield College course Introduction to Studio, taught by Totem Shriver. In honor of Linfield professor and artist Nils Lou, who passed away in December 2013, this year's sculptures respond to the prompt of "a dream house for Nils."

The satellite dish house idea first came to me from the fact that Nils Lou was a ceramicist. I mused that the perfect home for him to live in would be one that he made himself from clay. All I had was toothpicks. Along the way I began to worry that this idea was limiting and, worse, boring. He most likely would need some accessories in such a dwelling. Also, a little elevation might be nice for privacy. Furthermore it seemed a bit spare. I first elevated the vessel to help impart it with a sense of "dream house-ness." Following that came an old school TV antenna along with a contemporary flat screen TV. One foot in two worlds. Also included is a painter's easel with current painting of a ceramic bowl, and a chair to ponder his creation from. Then along came the notion that the bowl was now resembling a satellite dish antenna as well as a ceramic vessel. Thus the title: Satellite dish house. I also liked the play on words, satellite "dish." It is a bit of an oxymoron, or at the very least an unconventional setup. I think of Nils as unconventional. He took the path that very few choose to go down. He chose a path of his own creation.