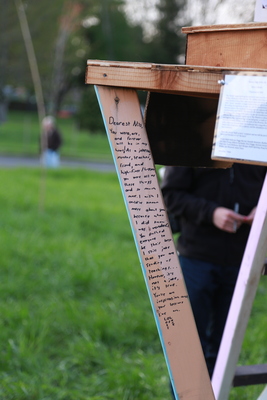 A message written on the collaborative burn sculpture reads:

You were, are, and forever will be in my heart! As a jokester, mentor, teacher, friend, and high-fiver/hugger you were all of these things and so much more. I wish I could've known more about you because what I did know was wonderful. You pushed everyone to be their best. I still joke that you are sending us teachings . . . However, it's not a joke, it's true. You're an inspiration and your lessons live on.

The ""family"" began building this structure with very few expectations except for it being a tribute piece for Nils Lou. The collaborative nature of our process allowed every student to form their own unique ideas and watch them coalesce with the other ""family"" members. A major theme of the project is cyclical time, death, rebirth, the ending and beginning of a new era, and the harmonious movement of energy between nature's five elements. This is based on the belief that rather than the Phoenix's life ending at the closing of the cycle, it is merely transformed into a new and different life, and the cycle begins again. The Phoenix is often paired with the dragon and together they represent high virtue and grace, as well as balanced male-female harmony in nature. Similar to the life cycle of the Phoenix, Nils's playhouse began with a collection of small ideas and coalesced into a magnificent statement. We believe Nils would enjoy this sculpture and the abundance of playful opportunities that it provides.