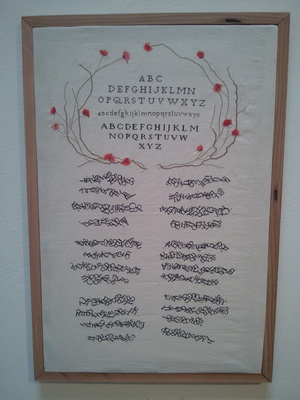 I Think I Saw Your Shadow Once . . ., made of embroidery floss on cotton, measures 15 inches by 22 inches. The full text of the poem reads:

i think i saw your shadow once
in the grass up on a hill,
but when i stepped towards you. God
you left; was it your will

that i should stand out there alone
and ask if it was you?
you said you would not speak to all
my God can this be true?

if i had not but moved an inch
would you have stayed with me?
i think forever of those steps
as i could nearly see.

i almost had a friend in you,
what was it i did wrong?
what could i have done differently
to be with you ever long?

i tried to send some words to you
but i don't know your address
i'll set them down right here instead
And hope you'll read the rest.

it's just that i don't know what to say
that could bring me any peace,
for i am cut to ribbons
by Regret's serrated teeth.

I’ve heard it said that speech connects the mind and body. I speak seldom. Perhaps this separation explains why my words don’t work. Hemingway might be right that words exist in the blood ant that writing is but bleeding on to the page because I have small veins and low blood pressure and when the doctor finally finds a vein, my blood crawls out; I write at a similar speed and with as much ease. But were Hemingway’s theory of language true, surely I would feel words stirring, instead they fizzle out before I can grab hold – I lose them before they are mine to lose. Then I think that they could live externally, maybe floating in the air, and like a whale I wander with my mouth agape hoping some verbal plankton will get caught in my baleen.

So out of frustration and with a touch of good-natured spite I invert my letters, make them impotent. I know of no better way to show them how it feels to have something to say and fail to say it. You may say, “As these are your words you only stifle your own expression.” To which I respond:

Tangled and tumbled, the letters mirror how I feel they change on the path from brainstem to fingertips.

Should they object to my treatment, I would argue that I am doing them a service. Once unable to convey their message, we can appreciate them for the splendid series of lines they are. And they needn’t worry about seeming hollow scratchings, for their meaning doesn’t disappear with readability, only becomes obscured. With their form foregrounded they acquire an air of mystery.

If, in the future, my relationship to words changes and one of us becomes more pliable to the other’s will, I may be able to place them upright. Until that time, I am more precise when illegible.

This work appeared in the 2015 Student Portfolio Exhibition at Linfield College. Photograph courtesy of Jana Purington.