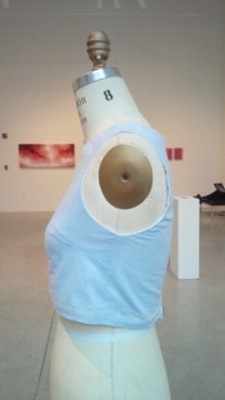 This work appeared in the 2015 Annual Juried Student Exhibition at the Linfield Gallery at Linfield College in McMinnville, Oregon.

Corseted in Eggshell Taking Steps with Bated Breath is made of embroidery floss on cloth.

“The trouble is all in the knob at the top of our bodies. I'm not against the body or the head either: only the neck, which creates the illusion that they are separate. The language is wrong, it shouldn't have different words for them. If the head extended into the shoulders like a worm's or a frog's without that extension, that lie, they wouldn't be able to look down at their bodies and move them around as if they were robots or puppets; they would have to realize that if the head is detached from the body both of them will die.” - Margaret Atwood, Surfacing

Except I like a separate head. Language is abstract but the body can ache and wither and rot and die. In terror, language goes and I am keenly aware that I am a mortal thing. With the illusion of separation I can say “send my body to the wolves” only let me – this voice – float free. Really, it would make things so much easier, to not have fear touch my muscles which can writhe. That would leave only the existential dilemmas. But because the head is not separate, language and reason do not leave the body. They lose their form. Words tangle, run in circles, and prove that a once sentient being has been reduced to something speechless. When words dissolve you howl.

Except perhaps I envy the things that aren't reduced to howling, the creatures who have no words to start.