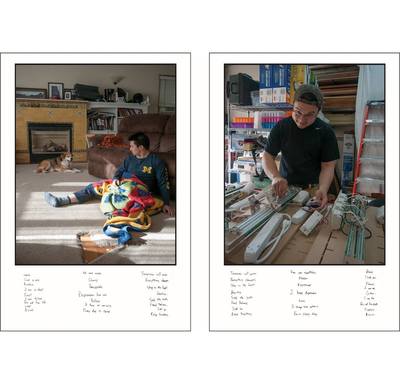 Chau, a digital photograph, is part of the Dualities series.

Artist's Statement:
As a person who suffers from bipolar II disorder, I lead a double life. I have one persona that people see everyday, and another that I hide from the world. Many others who suffer from bipolar and depression have the same experience. I decided to document this experience in a photographic series titled Dualities. I believe it is important to put a human face to disorders that affect millions of people.

In Dualities, each piece is comprised of two photographs. The first presents the individuals as they prefer to be seen—for example, dressed up for a formal portrait or playing the guitar— and the second shows what they do when they are depressed, such as lying in bed. Under each photograph is a caption handwritten by the subject about music they listen to, their experience or anything that relates to each state of mind. The result is two images of each person, one up and one down.

Although 5.7 million American adults are diagnosed with bipolar disorder and approximately 14.8 million are afflicted with depression, these disorders are often misunderstood. Bipolar disorder, previously referred to as manic depression, is characterized by radical mood changes that range from mania to major depressive episodes. Most subjects are hospitalized at least once during their lives. Bipolar II is one type of bipolar disorder, in which people can suffer long-lasting bouts of major depression usually with less severe manic episodes. People with major depression experience extreme, often debilitating lows. Approximately 1 in 5 people with bipolar disorder commit suicide. All these disorders are extremely disruptive to people’s relationships and work, yet many blend in with general society and can disguise themselves a “normal” person.

I begin creating a photograph by getting to know my subject. I meet with them over coffee and just talk. It is important to establish a rapport with one another in order to make a connection between photographer and subject. We discuss how they would like to set up the photographs. I give the subject control over the setting. They decide where they want to be photographed and what they will be doing.

The first image I took was a self-portrait. I learned a lot by turning the camera on myself. I experienced a state of vulnerability. It forced me to confront my disorder in a way I had never experienced. Becoming a subject, I had to announce to the world that I suffer from bipolar II. The writing section, conversely, was very cathartic. It was a way for me to parse out my actions in my different states of mind.

It is my hope that interacting with this work will reduce the stigma of bipolar and depression. I believe everyone can relate to a sense of a public and private life. Through this series and the conversations that I hope it inspires, people without these disorders can connect with the people who have them.

This work appeared in the 2016 Faculty Exhibit, an exhibition presented by the Nils Lou Gallery and the Department of Art and Visual Culture at Linfield College during September 2016. Image courtesy of Liz Obert.