Robin, After a Sweep 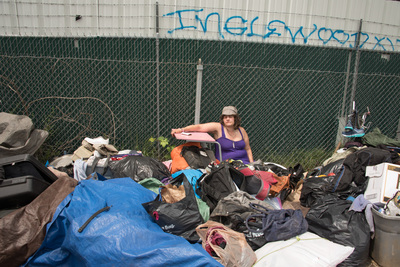 Robin, After a Sweep, color photograph.

What possession would you take with you if your house was on fire? It's a cliché question, but an important way to think about our relationship to our stuff. We all have our favorite items. The object that we feel we would be lost without. However, we often have so many possessions we take them for granted. People living on the streets do not have that luxury. They have very few things that belong to them. What they do have is often stolen or taken away from them during frequent sweeps.

More and more families can no longer afford to live indoors. High property prices and disappearing affordable housing have thrown people onto the streets. I have been spending time with people that are camped in an area in SE Portland and have been documenting their camps as they move from site to site, fleeing from the sweeps in which Portland Police, private contractors for the Oregon Department of Transportation, Portland Metro, and other agencies force campers to move and take away any of their stuff they are unable to take with them.

This project has two objectives. One is to explore campers' complex relationships to their possessions. The other is to show how and why homeless residents tend, organize, and manage their modest universe of things. Both tasks serve to make housed neighbors aware of the challenges that unhoused residents face from continual displacement and from public display of their private things and lives.

This work appeared in the 2018 Faculty Exhibit, an exhibition presented by the Nils Lou Gallery and the Department of Art at Linfield College during September 2018. Image courtesy of Liz Obert.